Joe Hill was executed at the Utah State Prison in Salt Lake City, Utah, on November 19 1915 at 7:22AM. When the state moved the prison in the 1950s, that site became a park operated jointly by Salt Lake City and Salt Lake County. Now, the busy and beautiful 110-acre Sugar House Park seems an unlikely location for a prison.

The Vigil, 2015. Each year, a small group of Wobblies and others visit the area of Sugar House Park where Joe Hill was killed. This year on the centennial, a bigger group is expected, both at the time of execution (7:22AM, near dawn) and in the evening at 6:00PM at a vigil arranged by the Industrial Workers of the World. The IWW will provide candles.

Directions. Enter Sugar House Park from 2100 South at either 1400 East or 1500 East. Park along the side of the road before the road turns south. Meet at the prison marker just south of road at the 1400 East entrance. The area is a hill overlooking the rest of the park, surrounded by trees.

Joe Hill’s Last Will. After the vigil, at 7:00PM at The State Room (638 South State Street), John McCutcheon will perform Si Kahn’s one-man play, “Joe Hill’s Last Will,” which follows Joe on his last day, speaking his words and singing his songs. There will be a panel discussion with singer & actor John McCutcheon, playwright & songwriter Si Kahn, and historian John Sillito. Tickets available in advance or at the door (if they don’t sell out).

The exact location of the prison was near the current entrances at 1400 East and 1500 East, on a high, flat area on the north side of the park. In the map below, the prison was located in the section just above the “r House P.” 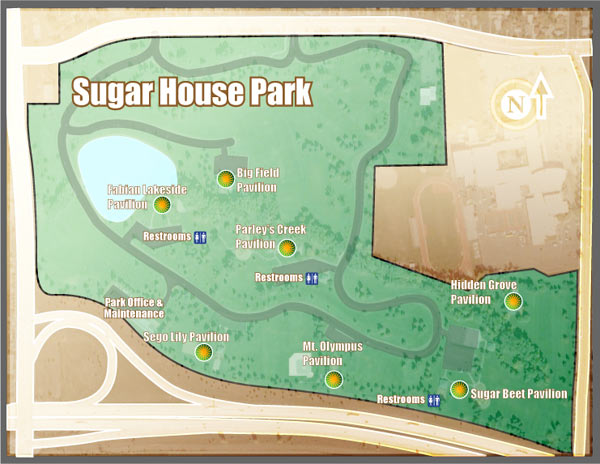 Is there a monument for Joe Hill in the Park?

We have been asked often if there is a monument for Joe Hill on the site of his death. There isn’t a marker in the park specifically for Joe Hill, and there hasn’t ever been a permanent marker.

There is a marker on the site of the old prison. To visit the marker, enter the park at the furthest west entrance (1400 East 2100 South). Turn right (all traffic moves counter-clockwise around the park) and park as soon as you can on the side of the road. Near that entrance, among the trees just to the south of the road, is the prison marker.

You aren’t the only one to wonder why there is no monument or other sign marking the place Joe Hill died. Members of the Joe Hill Organizing Committee have approached the Park Authority about a monument. Though there is none currently approved, the situation is slowly softening. We still have hopes that, in the future, there will be a monument to Joe Hill near the spot of his death.

When you are in the Sugarhouse neighborhood of Salt Lake City, you can visit the site of Joe Hill’s death. When you go into the park from 2100 South, you are exactly in the area where the prison yard was.

The Joe Hill Centennial Celebration, the free, all-day concert on Labor Day Weekend, will take place about 100 yards down the hill from the old prison yard (in green). The hill itself creates a natural amphitheater, great seating for you to see and hear the concert. 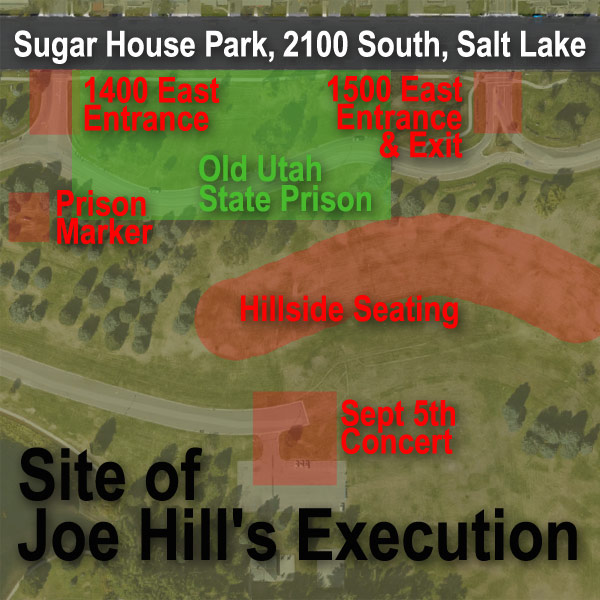 More on the history of Sugar House Park.
http://www.sugarhousepark.org/history/