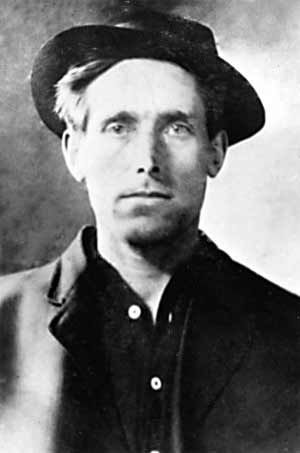 Joe Hill wrote most the songs that we now know him for over a period of four years, 1911 – 1915. During those years, he wrote the majority of songs included in the I.W.W.’s Little Red Songbook.

His songs were so popular because of his singular talent for boiling down complex social and economic issues into darkly funny parodies, and because he set the songs to familiar tunes that were easily memorized.

Political songs. We might sing these as American folk songs now, but Joe Hill’s contemporaries sang these parodies at street meetings. They countered the other voices on the streets, like Salvation Army preachers, and they rallied workers to the union. Then and now, these are political songs—songs with political messages that still resonate with contemporary social justice issues.

A pamphlet, no matter how good, is never read more than once, but a song is learned by heart and repeated over and over. And I maintain that if a person can put a few common sense facts into a song and dress them up in a cloak of humor, he will succeed in reaching a great number of workers who are too unintelligent or too indifferent to read.

Joe Hill, November 29, 1914, letter to the editor of Solidarity, a newspaper published by the IWW.

In only three years, Joe Hill expressed the illusory promise to the working class and dragged it into consciousness as his fellow workers sang parodies in the voices of “the long-haired preachers” luring them with “voices so sweet” by promising “you’ll eat pie in the sky when you die.” That’s a lie.

Now, that sharp awareness that we’re being lied to when we’re promised pie in the sky is one of the enduring cultural legacies of Joe Hill’s songs, as the phrase “pie in the sky” has entered the American language separate from its origins in Joe Hill’s “The Preacher and the Slave.”