You are here: Home / Joe Hill / Joe Hill Songs / The Preacher and the Slave 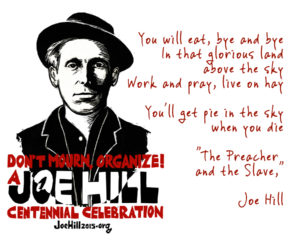 Topic: street preachers and their brass bands would attempt to drown out Wobblies, who stood on soapboxes on the streets to speak to workers.

Pie in the Sky. Joe Hill’s greatest contribution to our common language was the phrase “pie in the sky,” about the illusory promise made by long-haired preachers of the Salvation Army that workers will get their reward in another life and shouldn’t worry so much about mundane needs like eating in this life.

You know the ‘Long-haired Preacher Song? Everybody knows that. I had the honor of singing that for the first time in public. Joe brought it in and turned it over to the Secretary of the Portland local of the IWW. He got out a leaflet on it. I think we sold, at the second street meeting—the first street meeting we weren’t prepared, we didn’t have it printed—but the second street meeting we sold over $30 worth of them at a dime a throw or whatever they wanted to contribute.

“The Preacher and the Slave,” listed in the documentary film “Get Up, Stand Up: The Story of Pop and Protest” as one of

Five groundbreaking songs that have transcended their genre and the era in which they were written to become anthems of protest.

CHORUS:
You will eat, bye and bye
In that glorious land above the sky
Work and pray, live on hay
You’ll get pie in the sky when you die (that’s a lie)

Holy rollers and jumpers come out
They holler, they jump, and they shout
Give your money to Jesus they say
He will cure all diseases today

If you fight hard for children and wife
Try to get something good in this life
You’re a sinner and bad man, they tell
When you die you will sure go to hell

LAST CHORUS:
You will eat, bye and bye
When you’ve learned how to cook and to fry
Chop some wood, twill do you good
And you’ll eat in the sweet bye and bye (that’s no lie)