You are here: Home / Joe Hill / Joe Hill Songs / There Is Power in a Union 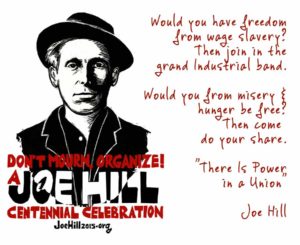 Title: “There Is Power in a Union”

Topic: contrast between what unions offer and what religion offers

Joe Hill’s prolific year: 1913. Joe Hill and other local Wobblies organized immigrant workers brought in to San Pedro, California, to depress dockworkers’ wages. AFL controlled hiring, and they made sure Wobblies and immigrants were at the end of the line when jobs opened. IWW members organized strikes against this practice in San Pedro. Joe Hill was Secretary of the strike committee.

Idle Wobblies had plenty of time to plan, to organize, and to write letters and songs. Joe Hill welcomed other Wobblies to his tar-paper shack on the pier. One of the friends he invited to stay in his shack remembered Joe Hill’s joy as a songwriter.

A few of us would be sitting around the dock. We would be working over a mulligan and shooting the bull. . . Suddenly his face would light up and he’d dash into the shack. In a minute or so we’d hear the plunk-plunk of a guitar. If the line or quatrain panned out to his satisfaction, he would dash out to us simply aglow at his latest rhyming achievement.

His joy when he hit the jackpot of a jingle was a joy to behold.

Joe Hill wrote 10 of the 12 songs in The Little Red Songbook of March 1913. Four of the seven songs in the previous year’s songbook were his. Joe Hill’s friend, Alexander MacKay, described the songwriting process as difficult for Joe, but the scarcity of work gave him the time to write songs. Free time during the strike resulted in Joe Hill’s most prolific year as a songwriter.

The Sailors’ Rest Mission. Joe Hill had a guitar in his shack on the pier, but he didn’t have a piano. For a piano and a meal, he visited the Sailors Rest Mission, where the minister treated him kindly. Not a long-haired preacher, apparently. Sometimes Joe Hill even played piano for services at the Mission.

He used our piano a great deal, for he was a musician, [but] he refused to be a Christian.

Church songs. “There is power in a union” shows how well Joe Hill knew the hymns he rewrote as labor anthems. “Would you be free from the burden of sin?” asks “The Power in the Blood (of the lamb),” the Christian hymn that Joe Hill transformed into a rousing labor hymn. The burden Joe Hill finds on working people is not sin but wage slavery. He even addressed the original song in the lines, “If you’ve had enough of the ‘blood of the lamb,’ then join in the grand industrial band.”

Yes, he knew church songs. He played piano at the Mission as church members sang hymns, but Joe Hill believed in a much different, more earthly power of working people united.

As with many of Joe Hill’s song’s, people today tend to change the lyrics to make them fit 21st-century sensibilities. Now, “there is power in a band of workingfolk” rather than “workingmen.” And we call out, “Then come, do your share, lend a hand” rather than “like a man.”

As Wobblies sent Joe Hill’s body on the train from Salt Lake City to Chicago in November 1915, they marched behind the hearse to the train station singing “There Is Power in a Union.”

Would you have freedom from wage slavery?
Then join in the grand Industrial band
Would you from mis’ry and hunger be free
Then come, do your share, like a man

Would you have mansions of gold in the sky
and live in a shack, way in the back?
Would you have wings up in heaven to fly
And starve here with rags on your back?

If you’ve had enough of the “blood of the lamb”
Then join in the grand industrial band
If, for a change, you would have eggs and ham
Then come, do your share, like a man

If you like sluggers to beat off your head
Then don’t organize, all unions despise.
If you want nothing before you are dead
Shake hands with your boss and look Wise

Come, all ye workers, from every land,
Come, join in the grand industrial band
Then we our share of this earth shall demand.
Come on! Do your share, like a man.

Video below is a recording of Utah Phillips and members of the Entertainment Workers Industrial Union local 630, IWW. Recorded 1984 at Holstein’s, Chicago, Illinois. From Rebel Voices: Songs of the Industrial Workers of the World (Flying Fish FF484), 1988.