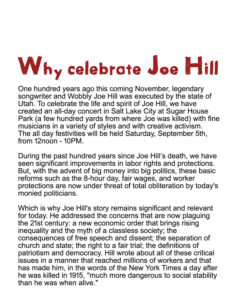 The images and text on this page are from the Joe Hill Centennial Celebration concert program. You can still buy a copy of the program as of November 2015.

We still celebrate the life and work of Joe Hill because the rights of working people are still under threat. 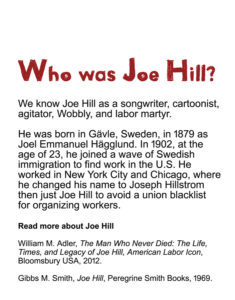 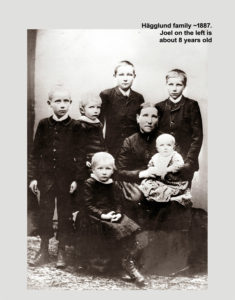 Who was Joe Hill? 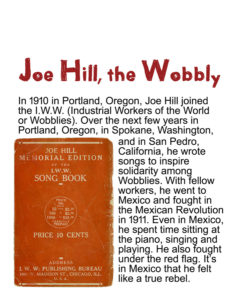 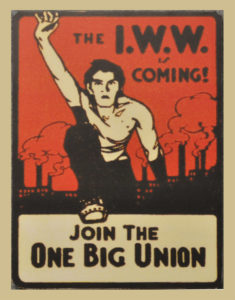 In 1910 in Portland, Oregon, Joe Hill joined the I.W.W. (Industrial Workers of the World or Wobblies).

Over the next few years in Portland, Oregon, in Spokane, Washington, and in San Pedro, California, he wrote songs to inspire solidarity among Wobblies.

With fellow workers, he went to Mexico and fought in the Mexican Revolution in 1911. Even in Mexico, he spent time sitting at the piano, singing and playing. He also fought under the red flag. It’s in Mexico that he felt like a true rebel. 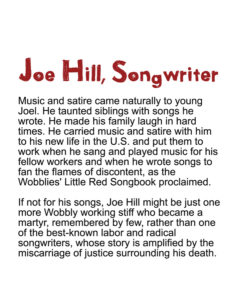 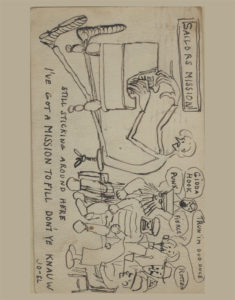 Music and satire came naturally to young Joel. He taunted siblings with songs he wrote. He made his family laugh in hard times. He carried music and satire with him to his new life in the U.S. and put them to work when he sang and played music for his fellow workers and when he wrote songs to fan the flames of discontent, as the Wobblies’ Little Red Songbook proclaimed.

If not for his songs, Joe Hill might be just one more Wobbly working stiff who became a martyr, remembered by few, rather than one of the best-known labor and radical songwriters, whose story is amplified by the miscarriage of justice surrounding his death. 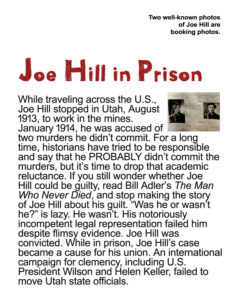 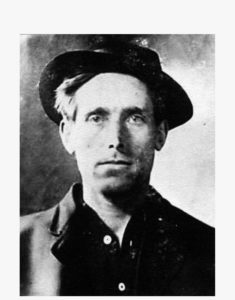 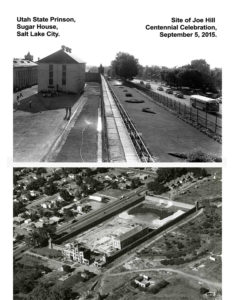 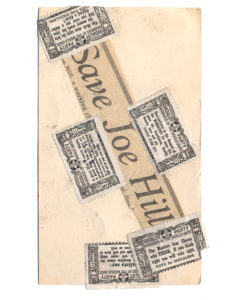 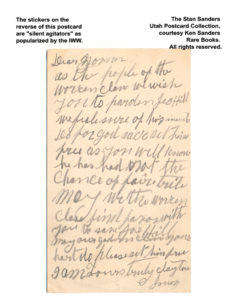 While traveling across the U.S., Joe Hill stopped in Utah, August 1913, to work in the mines. January 1914, he was accused of two murders he didn’t commit.

For a long time, historians have tried to be responsible and say that he PROBABLY didn’t commit the murders, but it’s time to drop that academic reluctance. If you still wonder whether Joe Hill could be guilty, read Bill Adler’s The Man Who Never Died, and stop making the story of Joe Hill about his guilt. “Was he or wasn’t he?” is lazy. He wasn’t. His notoriously incompetent legal representation failed him despite flimsy evidence.

Joe Hill was convicted. While in prison, Joe Hill’s case became a cause for his union. An international campaign for clemency, including U.S. President Wilson and Helen Keller, failed to move Utah state officials. 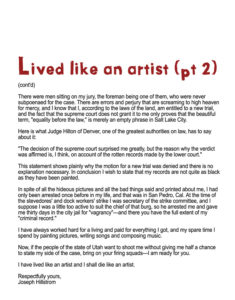 I have noticed that there have been some articles in your paper wherein the reason why I discharged my attorneys, F.B. Scott and E.D. McDougall, was discussed pro and con. If you will kindly allow me a little space, I think I might be able to throw a little light on the question.

There were several reasons why I discharged, or tried to discharge, these attorneys. The main reason, however, was because they never attempted to cross examine the witnesses for the state, and failed utterly to deliver the points of the defense.

I picked up a record myself and tried to look at it, but Mr. Scott took it away from me, stating that “it would have a bad effect on the jury.” I then came to the conclusion that Scott and McDougall were not there for the purpose of defending me, and I did just what any other man would have done—I stood up and showed them the door. But, to my great surprise, I discovered that the presiding judge had the power to compel me to have these attorneys, in spite of my protests.

The main and only fact worth considering, however, is this: I never killed Morrison and do not know a thing about it.

He was, as the records plainly show, killed by some enemy for the sake of revenge, and I have not been in this city long enough to make an enemy. Shortly before my arrest I came down from Park City, where I was working in the mines. Owing to the prominence of Mr. Morrison, there had to be a “goat,” and the undersigned being, as they thought, a friendless tramp, a Swede, and, worst of all, an I. W. W., had no right to live anyway, and was therefore duly selected to be “the goat.”

There were men sitting on my jury, the foreman being one of them, who were never subpoenaed for the case. There are errors and perjury that are screaming to high heaven for mercy, and I know that I, according to the laws of the land, am entitled to a new trial, and the fact that the supreme court does not grant it to me only proves that the beautiful term, “equality before the law,” is merely an empty phrase in Salt Lake City.

Here is what Judge Hilton of Denver, one of the greatest authorities on law, has to say about it:

“The decision of the supreme court surprised me greatly, but the reason why the verdict was affirmed is, I think, on account of the rotten records made by the lower court.”

This statement shows plainly why the motion for a new trial was denied and there is no explanation necessary. In conclusion I wish to state that my records are not quite as black as they have been painted.

In spite of all the hideous pictures and all the bad things said and printed about me, I had only been arrested once before in my life, and that was in San Pedro, Cal. At the time of the stevedores’ and dock workers’ strike I was secretary of the strike committee, and I suppose I was a little too active to suit the chief of that burg, so he arrested me and gave me thirty days in the city jail for “vagrancy”—and there you have the full extent of my “criminal record.”

I have always worked hard for a living and paid for everything I got, and my spare time I spend by painting pictures, writing songs and composing music.

Now, if the people of the state of Utah want to shoot me without giving me half a chance to state my side of the case, bring on your firing squads—I am ready for you. 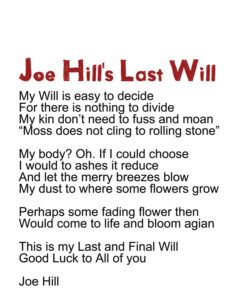 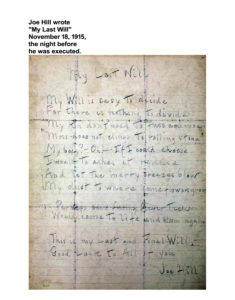 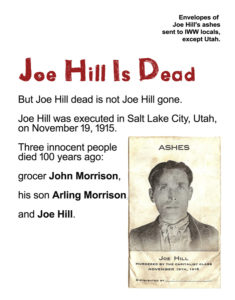 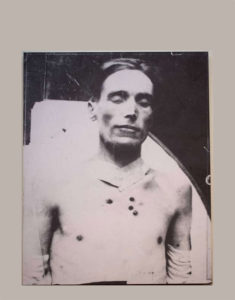 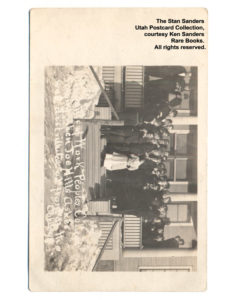 Don’t Waste Any Time in Mourning

Good-by, Bill. I will die like a true-blue rebel.
Don’t waste any time in mourning—organize.

Good bye, Joe. You will live long in the hearts of the working class. Your songs will be sung wherever the workers toil, urging them to organize!

Our beloved dead do not ever wholly die. So it will be, men and women, with Joe Hill.

Get a copy of Joe Hill’s short biography

Images and text from the Joe Hill Centennial Celebration concert program. You can still buy a copy of the program as of November 2015. 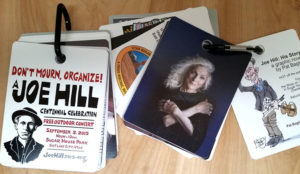