You are here: Home / Blog

Archie was one of the young people who spent time in the 1960s with Ammon Hennacy, whose Joe Hill House of Hospitality in Salt Lake City served a population of homeless men so often ignored. The Joe Hill House also became a school for young radicals. Many young people—Archie Archuleta, Utah Phillips, and Gibbs Smith among them—found a fierce, firm radicalism in the ideas and actions of Ammon Hennacy.

Ammon Hennacy found Joe Hill an inspiration. Many people found Ammon Hennacy an inspiration, and many of them found their own way to spread social justice in the world. Archie Archuleta was one of those people. One of the ways Archie learned as a young man to be the quiet, sure activist he was had roots in the Joe Hill House.

Archie influenced so many

Over the past few days, we have seen an outpouring of personal experiences from people whom Archie nudged to take action in the world for social justice. He was an educator who loved working with young people. He was President of Utah Coalition for La Raza and served on many boards and commissions. Outside of institutional work, Archie gave generously of his time to those ready to make change in the world, especially young people. Many of the young people Archie has influenced already pass on that dedication to activism and action in their own work.

Archie Archuleta was an influential hub in social justice work in Salt Lake City. He joined the flow that came before him and will continue after him. He made it better. By observing the ways Archie embodied radicalism in the world, we all learned to be more fierce and more kind. 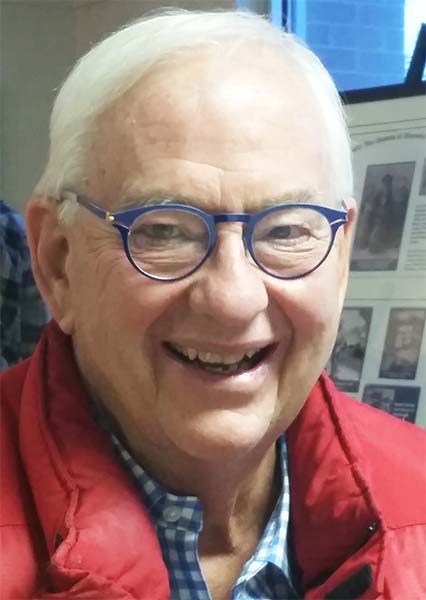 Utah’s historical, artistic, literary and publishing communities lost an important voice with the passing of Gibbs Smith on October 29, 2017. For us in the Joe Hill Committee, he was a mainstay over the past 28 years as we sought to mark the impact Hill had on this state.

As the author of one of the most important studies of the case, Gibbs was sought out frequently for his knowledge as well as for his advice and counsel. He was possessed with a lively amount of intellectual curiosity–a quality in short supply these days. Gibbs always asked good questions, expanded the boundary of knowledge, and tried to see history and art in new ways.

He will be deeply missed by all who knew him.

Her friend Duncan Phillips came by to tell me, and her brother Jim also called, as did her long time friend and fellow performer, Gino Sky. She had been ill for quite some time now and had been living in Reno with her daughter, far away from the cabin her father built in Grimes Creek. Funny, Jim told me that the road to Grimes Creek flooded out this spring, as if the river knew its mistress was gone and never coming back.

How many of us have made that pilgrimage over the years, to see her in her lair, the cabin her father built at the end of the road alongside Grimes Creek, where Rosalie dwelled. Rosalie’s story, her heart, her life, and her troubles are far too big to cover in a brief memento mori like this one. And although she died elsewhere, her spirit will always inhabit Grimes Creek.

Hunter S. Thompson traveled the path to Grimes Creek. Rosalie knew him from his Kentucky gentleman days, long before his first book, Hell’s Angels came out , and long before he became the crazed gonzo journalist that we know him by today. I have it on good authority that Rose could drink with Hunter all night long and then go and cook breakfast for a houseful of people the next morning.

Ken Kesey and his Merry Pranksters, drove Further, the Magic Bus, to Grimes Creek to pay homage to Rosalie. As did many, many other musicians, authors, artists and friends. Over the years. Rose’s legendary fandangos were not to be missed. They went on for days and days, some lasting a week or more. The music was playing live off a homemade stage Gino Sky built, twenty four hours a day. The whiskey, the poetry and the music all flowed down the throats into the ears and the hearts and minds of those who came and drank the wine. Rosalie seemingly knew everyone in the music, literary and art scene from the 1950s to the 21st century.

I first met Rosalie Sorrels in the 1970s, in the Cosmic Aeroplane days, through her longtime musical partner and friend, Utah Phillips. We sponsored the pair at a concert at East High, but the police dusted off an old arrest warrant for Phillips, and we had to bail him out of jail, so he could join Rosalie on the stage. I don’t think we ever told Rosalie. Rosalie graced my book shop with her presence on many occasions over the years, performing solo, and with old friends like the poet Gino Sky, and with many of the poets of the Limberlost Press out of Idaho.

I loved to hear her sing the song, “Waltzing With Bears” There was a stained glass window at Grimes Creek celebrating that song. Jefferson Starship recorded a Rosalie Sorrels tune, “The Baby Tree.”

I have a photo of Rose that she autographed “Rosario Bizarrio the Outlaw Queen” hanging in my downtown Salt Lake book shop. Those who knew her well, will know what that means. Rose could be, and usually was, a handful.

She was a great lady with a great musical talent, and I wanted to honor her with a few brief memories. 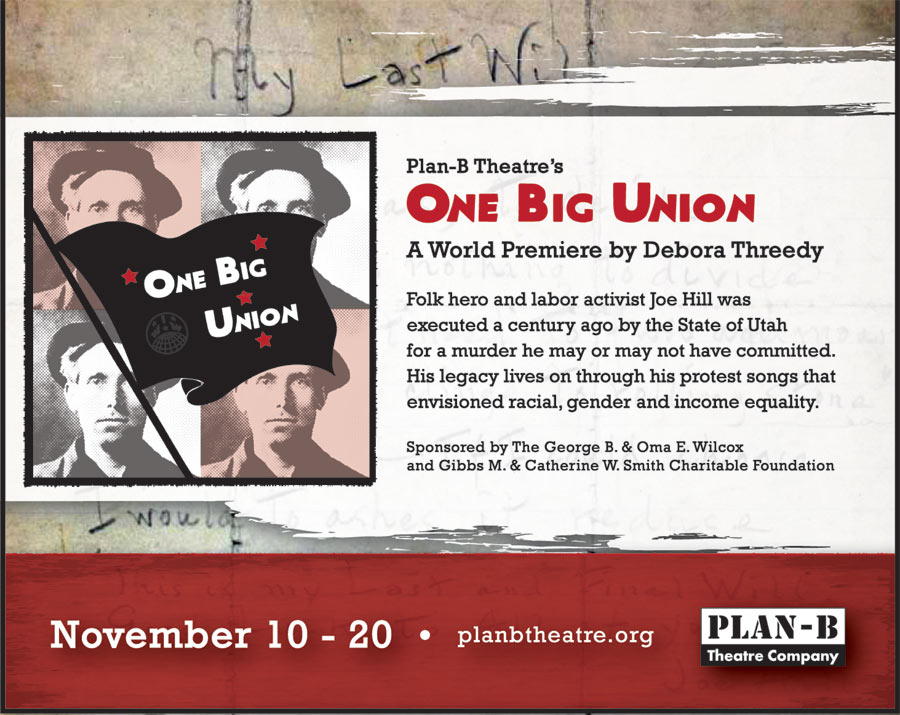 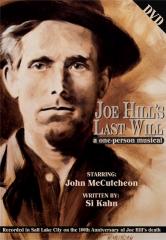 Were you in Salt Lake City on the centennial of Joe Hill’s death? If you missed John McCutcheon’s performance of Si Kahn’s play, “Joe Hill’s Last Will,” you can now see the performance on DVD.

Joe Hill’s Last and Final Song contest winner is Lynn Mantle. Lynn actually wrote music for both of Joe Hill’s love songs, but she submitted just “Come and Take a Joy-ride in My Aeroplane.” How she came to be interested and involved with Joe Hill is a great story of activism and music passed down from her mother.

Lynn Mantle tells her own story:

I am a Toronto based singer, songwriter, activist and the daughter of the late Arlene Mantle, who was a well known labour singer, songwriter, social justice activist and worked with Pete Seeger and Bruce Cockburn and the likes. Many years ago my mom and a few other Canadian activists were given pouches made by the late Rick Fielding with a bit of Joe Hill’s ashes. So I now have my late mother’s pouch and I must say it kind of felt like I had some help from the other side, coming up with the music and melody for this song.

She is also the proud, new owner of a gorgeous guitar made by Rolf Hägglund from rough wood.

Lynn will be performing this song live tonight (November 19th) at a Joe Hill celebration in Toronto. We will share more video of the song as we have it.

Many thanks to all of the songwriters who shared their music for Joe Hill’s words.

One of the largest single collections of original, historical documents concerning Joe Hill is in the Archives of the state of Utah. Given the greater context of his story, we know that these documents also give us clues how an innocent man was framed, convicted, and murdered.
These documents have now been digitized and made available online. You can read every heartbreaking letter and petition to stop then to condemn the execution. You can read the surveillance reports as the state of Utah infiltrated the local branch of the IWW. It’s a telling story of paranoia, corruption, and power—and, ultimately, murder of a poor, working stiff.
http://archives.utah.gov/digital/joe-hill.html 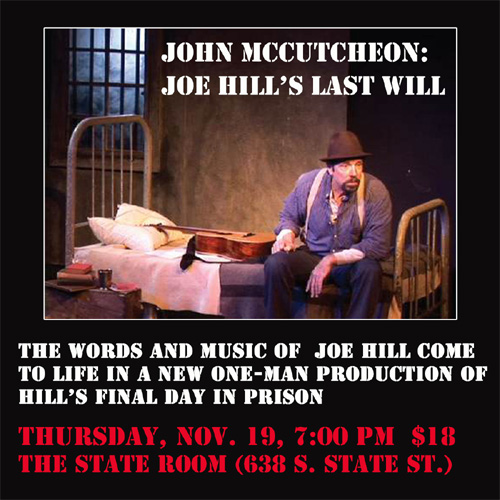 John McCutcheon in Joe Hill’s Last Will, a play by Si Kahn.

The words and music of Joe Hill come to life in a new one-man production of Hill’s final day in prison.

Date is the anniversary of the death of Joe Hill. Come to the play after the IWW’s vigil 6PM at Sugar House Park, the site of Joe Hill’s death 100 years before. 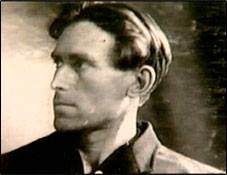 Big thanks to all at the Boing! house for hosting.

Curious about Boing!? Watch this profile with Salt the Block.