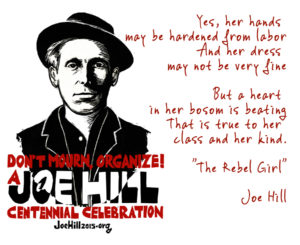 Topic: written for Elizabeth Gurley Flynn, whose organizing he admired.

Elizabeth Gurley Flynn. Joe Hill wrote in his letter to the editor of Solidarity in December 1914 that the I.W.W. needed to organize women workers, whom he considered to be “more exploited than men.” Without women, the union wasn’t whole.

We have created a kind of one-legged, freakish animal of a union.

Joe Hill and Elizabeth Gurley Flynn wrote to one another regularly from January through November 1915. Just before he died, he told her that when he composed “The Rebel Girl,” “you was right there and helped me all the time.” She used the title for her autobiography.

After she visited him in prison, she wrote of Joe Hill:

Joe writes songs that sing, that lilt and laugh and sparkle, that kindle the fires of revolt in the most crushed spirit and quicken the desire for fuller life in the most humble slave. He has put into words the inarticulate craving of ‘the sailor, the tailor and the lumberjack’ for freedom, nor does he forget ‘the pretty girl that’s making curls.’ . . . He has crystallized the organization’s spirit into imperishable form, songs of the people — folk songs.

When I was gathering songs by and about Joe Hill for Folkways on the 75th anniversary of Joe Hill’s death in 1990, I wanted both historical recordings and new recordings. In particular, I wanted a strong female voice for “The Rebel Girl.”

I was fortunate to work at Smithsonian Folkways with two members of The Johnson Mountain Boys, who frequently played with Hazel Dickens, so I knew her from the Washington, D.C., folk scene. I arranged that Hazel would record Joe Hill’s song with The Johnson Mountain Boys backing her up. Hazel didn’t want to sing the lyrics as is, though. She updated Joe Hill’s words for working women of a new century.

I got a lot of push back against having Hazel sing this song. A manager representing three 30-something young women of strong voices and moderate success in the late 1980s heard about the album and wanted his artists to sing the song as a trio. They were not interested in singing any other Joe Hill song. He pressured me to replace Hazel with this trio. He tried to go over my head! That’s not how the rebel girl works. As much as I wanted more women on that album, there was no chance I would replace Hazel.

It was Hazel’s voice I wanted on the album, and I’m pleased that the song became so closely associated with Hazel Dickens over the last 20 years of her life. When people honor her now after she’s gone, they often play “The Rebel Girl” as one of Hazel Dickens’ songs.

There are women of many descriptions
In this queer world, as everyone knows.
Some are living in beautiful mansions,
And are wearing the finest of clothes.
There are blue blood queens and princesses,
Who have charms made of diamonds and pearl
But the only and thoroughbred lady
Is the Rebel Girl

CHORUS
That’s the Rebel Girl, the Rebel Girl!
To the working class, she’s a precious pearl.
She brings courage, pride and joy
To the fighting Rebel Boy
We’ve had girls before, but we need some more
In the Industrial Workers of the World.
For it’s great to fight for freedom
With a Rebel Girl.

Yes, her hands may be hardened from labor
And her dress may not be very fine
But a heart in her bosom is beating
That is true to her class and her kind.
And the grafters in terror are trembling
When her spite and defiance she’ll hurl
For the only and thoroughbred lady
Is the Rebel Girl.

There are women of many descriptions
In this cruel world, as everyone knows.
Some are living in beautiful mansions,
And are wearing the finest of clothes.
There’s the blue blooded queen or the princess,
Who have charms made of diamonds and pearls
But the only and thoroughbred lady
Is the Rebel Girl.

CHORUS
She’s a Rebel Girl, a Rebel Girl!
She’s the working class, the strength of this world.
From Maine to Georgia you’ll see
Her fighting for you and for me.
Yes, she’s there by your side with her courage and pride.
She’s unequaled anywhere.
And, I’m proud to fight for freedom
With a Rebel Girl.

Though her hands may be hardened from labor
And her dress may not be very fine
But a heart in her bosom is beating
That is true to her class and her kind.
And the bosses know that they can’t change her
She’d die to defend the worker’s world.
And the only and thoroughbred lady
Is the Rebel Girl.