You are here: Home / Joe Hill 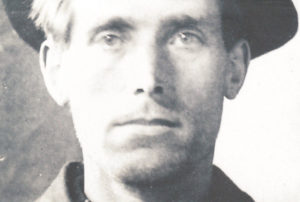 Who is Joe Hill? Who was he?

In 1910 in Portland, Oregon, Joe Hill joined the I.W.W. (Industrial Workers of the World or Wobblies). Over the next few years in Portland, in Spokane, Washington, and in San Pedro, California, he wrote songs to inspire solidarity among Wobblies. With fellow workers, he went to Mexico and fought in the Mexican Revolution in 1911. Even in Mexico, he spent time sitting at the piano, singing and playing. He also fought under the red flag. It’s in Mexico that he felt like a true rebel.

While traveling across the U.S., Joe Hill stopped in Utah in late 1913 to work in the mines. January 1914, he was accused of two murders he didn’t commit. For a long time, historians have tried to be responsible and say that he PROBABLY didn’t commit the murders, but it’s time to drop that academic reluctance. If you still wonder whether Joe Hill could be guilty, read Bill Adler’s The Man Who Never Died, and stop making the story of Joe Hill about his guilt. “Was he or wasn’t he?” is lazy. He wasn’t. His notoriously incompetent legal representation failed him despite flimsy evidence. Joe Hill was convicted.

While in prison, Joe Hill’s case became a cause for his union. An international campaign for clemency, including U.S. President Wilson and Helen Keller, failed to move Utah state officials. 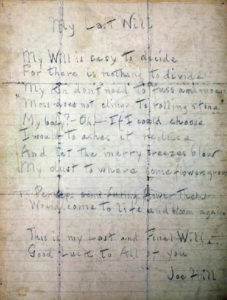