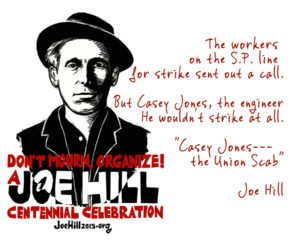 Topic: nationwide walkout by railway workers in September 1911 against both the Southern Pacific Railroad and the craft unions keeping workers from forming a single railway union.

How folk songs spread. How does a parody of a popular vaudeville song become “the classic American song about the scab”? [1]  Wobblies sold songcards to benefit the strike fund.

Hill’s song caught on quickly, first among Southern Pacific strikers in Los Angeles and San Pedro, where it was printed on small cards (roughly the size of a playing card) and sold in support of the strike fund. Workers passed the songcards around the country—and to union halls across the ocean.

The song’s popularity at the time surprised even Joe Hill. Over generations, through popular singers like Pete Seeger and on many picket lines, the song passed into the canon of political folk music.

The workers on the S.P. line for strike sent out a call
But Casey Jones the engineer, he wouldn’t strike at all
His boiler it was leaking, and the drivers on the bum
And the engines and the bearings, they were all out of plum

Casey Jones, kept his junkpile running
Casey Jones, was doing double-time
Casey Jones, got a wooden medal
For being good and faithful on the S.P. line

The workers said to Casey, “Won’t you help us win this strike?”
But Casey said, “Let me alone, you’d better take hike”
Well Casey’s wheezy engine ran right off the worn out track
And Casey hit the river with an awful crack

Well Casey got up to heaven to the pearly gate
He said, “I’m Casey Jones, the guy that pulled the S.P. freight”
“You’re just the man,” said Peter, “our musicians are on strike
You can get a job a-scabbing any time you like”

Well the angels got together, they said it wasn’t fair
For Casey Jones to go around a-scabbing everywhere
The angels union number twenty-three, they sure were there
They promptly fired Casey down the Golden Stair

Casey Jones, went to hell a-flying
Casey Jones, the devil said “Oh fine
Casey Jones, get busy shovelling sulphur
It’s what you get for scabbing on the S.P. line”